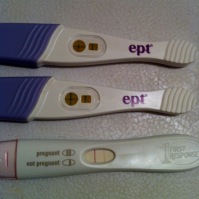 Tuesday, October 11th — I took a test first thing that morning…and two more that evening, just to be sure. I’ll admit I was a little scared when I saw a faint second line appear the little stick. I think the question, ‘is this really happening?’ ran through my head over and over and over. I ran in the kitchen to tell daddy, in just a mess of tears. I had dreams of telling him in some amazing way, but all of that went out the window when I realized this definitely was really happening.
But all of the fear quickly subsided and excitement in thinking of ways to tell everyone the news took over. Nauseousness set in almost immediately. No throwing up though, thank God. Just this cruddy, nauseous, really cold, unbelievably tired feeling ALL…THE…TIME. It became irritating and downright annoying. I didn’t want to do anything, just put on comfy sweats and curl up on the couch. I’m sleeping great though! Oh, and don’t get me started on the absence of coffee and a cold beer in my life right now…it’s rough.
Daddy’s been great. Better than great…he’s been amazing. Aunt Kristie bought him a book, Dude, You’re Going to be a Dad. It’s written by a guy so it’s got great perspective and has given Daddy a little heads up on what I’ll be going through and how to prepare for it. He’s really patient with me even though the laundry has piled up and the house is a constant wreck. We pick up dinner…a lot. And by we, I mean Daddy. But he doesn’t say anything; just let’s me make spaghetti (again) and cuddle up with him on the couch. He gets almost giddy when he talks to people about you. It’s really sweet 🙂 He’s going to be such a great daddy, you’ll see.

Hi, y’all, I’m Rachel! I have two beautiful children and am head over heels for their daddy. This is our crazy life and journey to a chemical free home. Welcome!